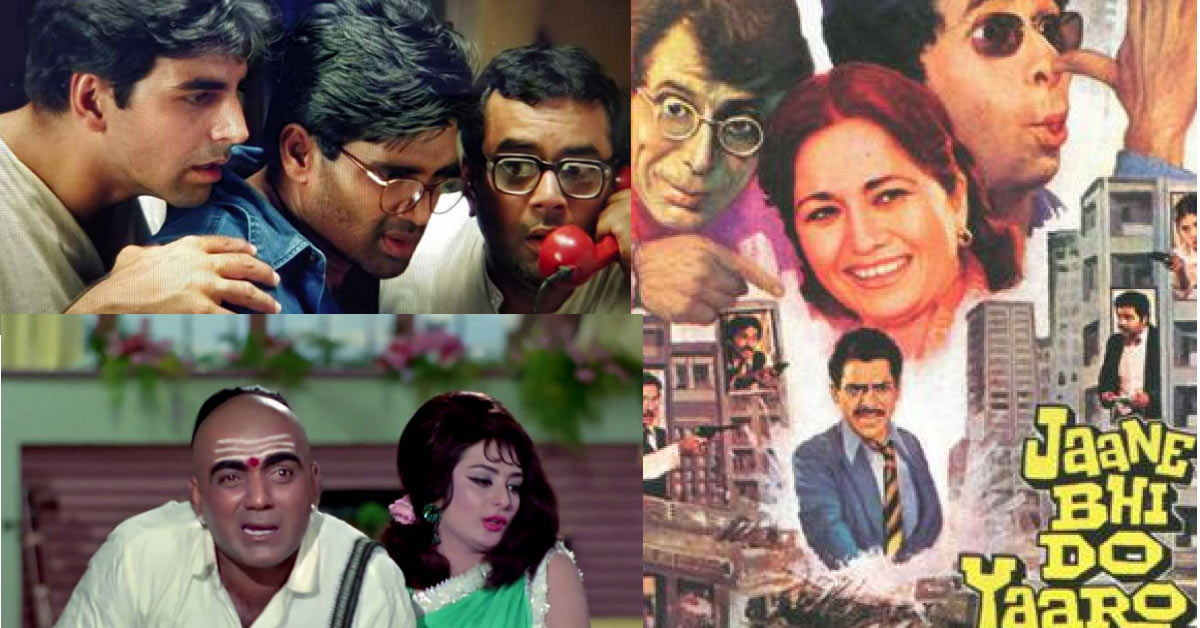 Comedy movies are always fun to watch. From the slapstick humour to the messes that the protagonist gets into – nothing beats watching comedy.

While modern comedy movies are great to watch, nothing is better than watching old Hindi comedy movies with their impeccable storylines and funny sarcastic humour.

This list consists of the top 10 old comedy movies Hindi that people from any generation will enjoy watching. We have listed them based on the year it was produced.

The movie is a funny tale of an entirely male-oriented household, where 3 brothers live. They have only one rule amongst themselves – no women. But what happens when the 2 younger brothers fall in love?

This madcap comedy turns into a romance with Madhubala and Kishore Kumar taking centre stage. And with the Ganguly trio – Ashok, Kishore, and Anoop – there are definite moments of actual brotherly banter that is India’s answer to the Marx brothers. 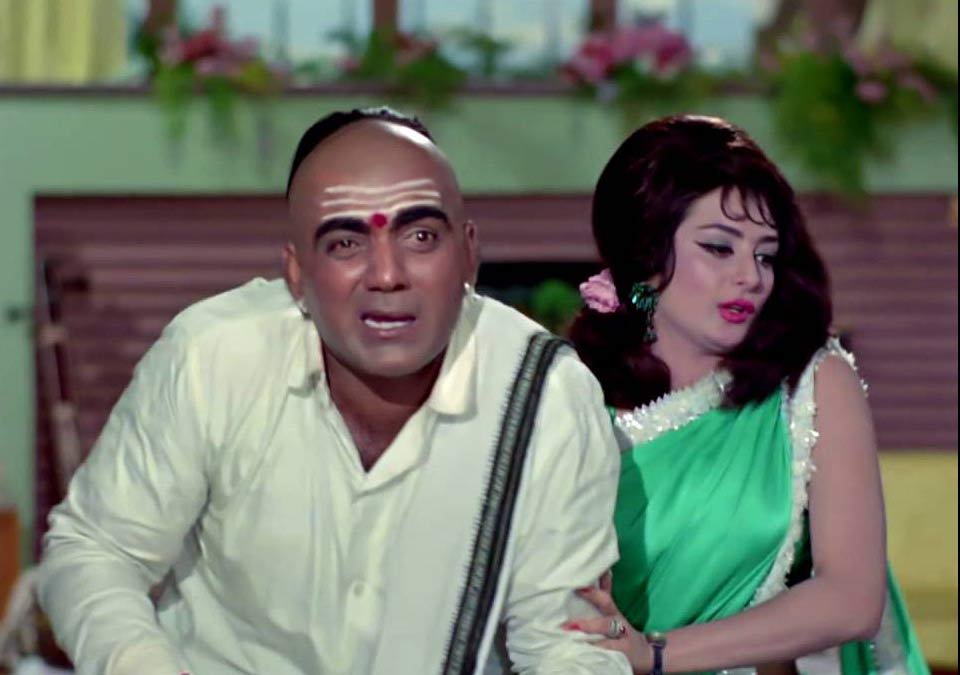 One of the top contenders in the best old Hindi comedy movies category of all time. Padosan is the love story between a simple boy and his beautiful neighbour.

But there is a twist in the love story. Her musical teacher, Mehmood also falls for her. And like any hero, Sunil Dutt asks his friends to impress the girl.

What entails is the singing challenges between Mehmood’s and Sunil Dutt’s character with Kishore Kumar actually lending Sunil Dutt his voice.

While the movie is a romance and has big names like Sunil Dutt, Mehmood, and Saira Banu, it is Kishore Kumar who steals the limelight. Which is why this movie tops the list of old comedy movies.

One of the best old Hindi comedy movies from the undisputed king of situational comedy, Hrishikesh Mukherjee. The movie is based on the iconic chemistry of Amitabh Bachchan and Dharmendra from Sholay.

This old Hindi comedy movie involves a series of misunderstandings and hilarious events that unravel in the end. Which is why Chupke Chupke comes in the top old Bollywood comedy movies.

This movie got raving reviews by not only film critics but audiences alike. Gol Maal is thought to be one of the best old Hindi comedy movies ever made.

Hrishikesh Mukherjee again delivers a slapstick comedy of a qualified CA, Amol Parekh, looking for a job. He comes in contact with Utpal Dutt, a businessman. But the actual story unfolds when Utpal Dutt shows his quirky side as an employer. He discourages his employees from pursuing any hobbies.

But things take a hilarious turn when Utpal Dutt catches Amol Parekh at a hockey match. What ensues is a tale of lies, acting, and a very funny moustache.

The movie continues with Amol Parekh trying to portray himself as a twin while a series of hilarious twists and turns finally gets Utpal Dutt to accept him.

If this movie seems familiar, the same plot was used in the movie ‘Bol Bachchan’. But this movie is far more hilarious and has more comedic sporadic than the newer version.

This is why this movie is in the top old Hindi comedy movies list.

One of Gulzar’s most comedic works, Angoor is loosely based on Shakespeare’s ‘A Comedy of Errors’. The movie is based on 2 sets of twins separated at birth and how when their paths cross what hilarious accidents occur.

So, what makes this movie different from the others on the list?

Every single character in the movie is played flawlessly. With Sanjeev Kumar and Deven Verma playing dual roles, they have done justice to each. Bringing out the flaws and strengths of each character.

Moreover, with the acting skills, the direction, and the screenplay is nothing short of magic.

Which is why Angoor comes in the top 5 old Hindi comedy movies to watch.

Another one of the great old Hindi comedy movies directed by Hrishikesh Mukherjee. The movie revolves around the relationship between a father and his son. Kailash Pati (Utpal Dutt) is a widower who worries about his son getting spoiled in the modern generation. So, he decides to do the best thing possible – get his son married off.

But while his father wants him to marry a simple girl from the village, Farooq Shaikh is in love with a modern well-educated doctor. So, torn between his love and his father’s decision he decides to do the next best thing – a lie. He gets his love interest, Deepti Naval, to play a simple village girl. But what happens when they get married?

What follows is a tale of hilarious events that leads to Utpal Dutt finally finding out the truth and accepting his doctor ‘bahu’ for who she is.

With the sarcastic give & take between father and the funny storyline, it is but obvious that Kissi Se Na Kehna is on the list of best old comedy movies Bollywood. A satire based on the Indian political scenario and corruption – Jaane Bhi Do Yaaro is based on the story of two friends battling corrupt politicians, gang lords and the mafia goons. Based on the friendship between Naseeruddin Shah, and Ravi Baswani and their efforts to keep their business afloat.

With mafia, gangsters, and politicians all trying to stop the ‘dynamic duo’ from going on with their work, this movie has some seriously hilarious scenes. The climax of the movie, although super cliched, is one of the best in old comedy movies – a stage recreation of Mahabharata.

This is why it isn’t hard to imagine why this movie is the list of old Hindi comedy movies.

The comedic movie directed by Rajkumar Santoshi, actually flopped in the box office when it first came out. Even with 2 super actors in the comic roles – Aamir Khan and Salman Khan. – the movie did not do well.

This old comedy movie is based on the story of two idlers who compete against each other to win the heart of an heiress for her money. The movie follows the antics of the two protagonists and also deals with the twin brother of the heiress’s father. He tries to get back at his brother by kidnapping his daughter.

While the movie has a very funny storyline, it is the acting skills of greats like Paresh Rawal, Aamir Khan, and Salman Khan that makes this movie hilarious. But let’s not forget about our own ‘Crime Master Gogo’ played by Shakti Kapoor. That role will go down in history as the most epic role played by an actor.

It is because of these stalworth actors that this movie is considered a cult classic and is on the list of old comedy movies to watch. 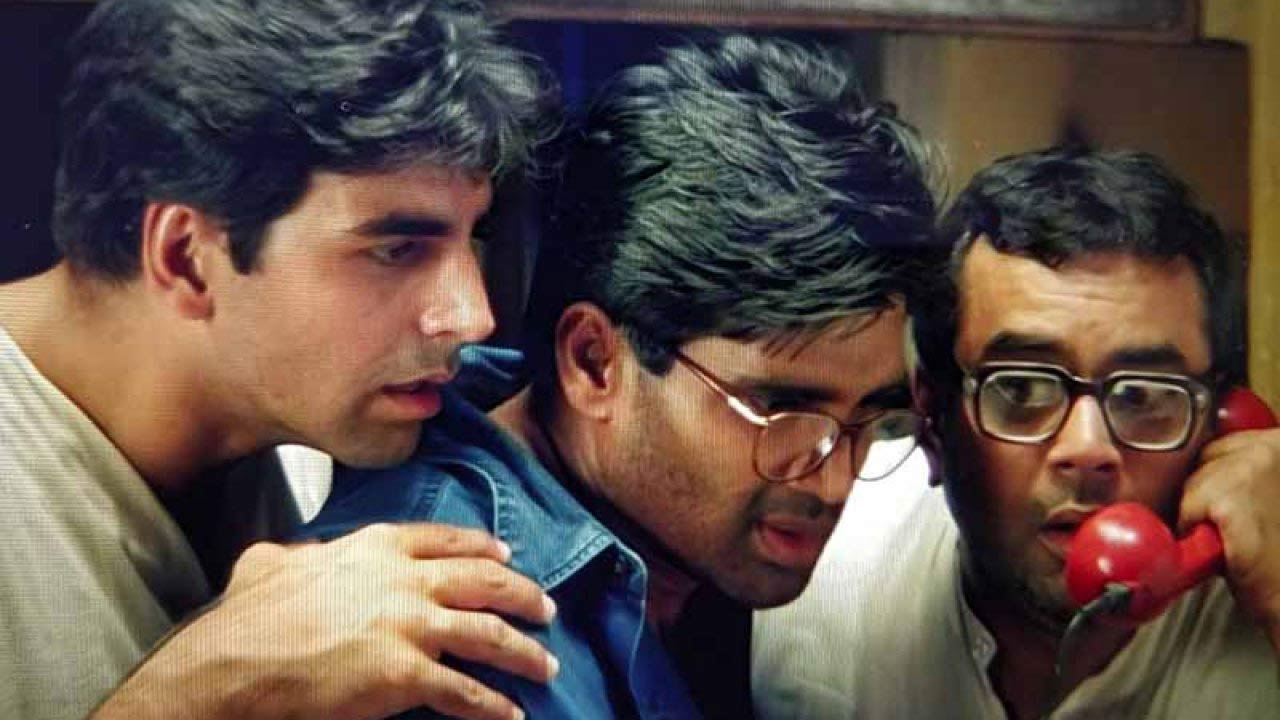 A Hindi remake of the 1989 Malayalam film Ramji Rao Speaking, Hera Pheri has become a classic cult film. Revolving around the iconic trio – Akshay Kumar, Sunil Shetty, and Paresh Rawal – who find themselves involved in crazy events including kidnapping.

What makes this film is not only the hilarious taglines and script but the acting of the trio. Which is why this film is considered as one of the old comedy movies Hindi classics.

One of the most recent comedy movies in the list, Hungama is a funny take on the age-old theme ‘wrong place at the wrong time’. The movie revolves around the love triangle story between Akshaye Khanna, Rimi Sen, and Aftab Shivdasani. But also around the misgivings of Paresh Rawal and Shoma Anand.

The movie ends with a final twist – where everyone comes clean about their feelings and who they want to be with.

With the acting talents of Paresh Rawal, Shoma Anand, Rajpal Yadav, and Shakti Kapoor, it isn’t a mystery as to why the movie is great. But somehow they overshadow the main protagonists. Which still does not stop the movie from being funny. And being a part of the old comedy Hindi movies list.

Old Comedy Hindi movies are the best no matter the era. With its hilarious scripts, funny situations, and epic acting – Old Bollywood Comedy Movies – are perfect entertainers for the family.

This complete list of old comedy movies Bollywood is not complete in any way. If you think we have missed something then get in touch with us and we’ll update the list.