Reality TV is something all Indian families love to binge-watch. Whether it is a drama or thriller series – everyone gets together to enjoy Prime Time viewing. But singing shows have a different place in the hearts of Indians. Indian singing programs help showcase new talents and allow people to build their careers in music.

So, let’s see the top 10 Popular reality TV singing shows in India to binge-watch on:

The Voice India is first on our list of Indian singing shows to watch. This International reality show has its origins in the Dutch series and has become a worldwide sensation.

The series has a panel of 4 coaches who select contestants for their team from blind auditions. They listen to the contestants first with their chairs turned around. And if they like what they hear they can select a contestant with the ‘I Want You’ button. The contestants on the teams develop their mental and musically with the help of their mentors or judges.

The contest starts when judges put two of their own team members against one another to advance to the next stage, the Super Battle round. At this level, the remaining contestants perform solo on stage to compete for a place in the Grand Gala round. The coaches or judges choose two members from each performance to move to the Grand Gala Round. In this round contestants sing individually and compete with members from other teams. But, the television audience votes to choose which contestant stays and who goes. Finally, each coach has their best contestant left who sings an original song. From the four, one gets the title of ‘The Voice’ and receives the prize money. 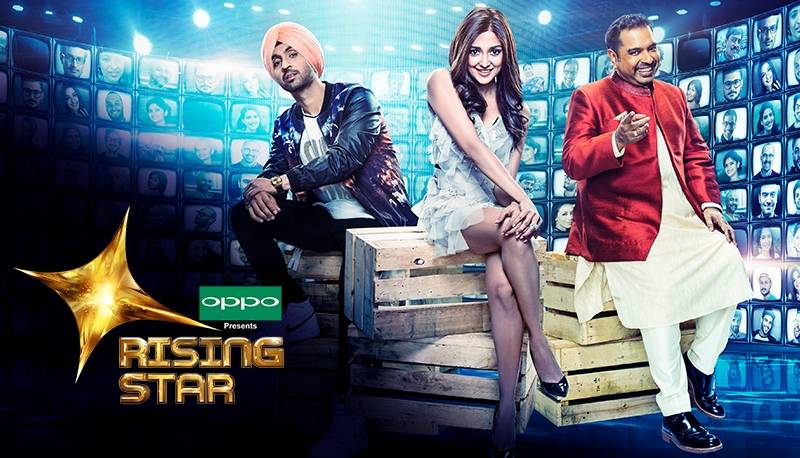 Rising Star is next on our list of singing shows in India to watch. The Indian version of rising Star, the series appears on Colors TV and Voot App. The difference in this show from others is that Rising Star has a cast of expert celebrities and the judges are the people sitting at home and voting. While the viewers at home are the judges, the experts on the panel also have an influence but that does not exceed 5% of total voting rights.

The first round is the auditions where the contestants sing individually. Viewers register their votes for specific acts they like. The candidate performs behind a wall and if the contestant reaches 80% then they go to the next round. Once the contestants make it through the blind auditions, they pass on to the duel rounds. The first contestant who sings has the wall up and voters cast their votes. But, when the second contestant sings, they need to get more votes than their competitor otherwise they will be eliminated.

One of the most popular singing reality shows in India, Indian Idol has been on air since 2004. With winners like Abhijit Sawant, Prashant Tamang, and Salman Ali, Indian Idol has its own fan following in India. This reality talent show was one of the first to start encouraging people to vote for their favorite contestants. With a panel of 3 judges, the auditions take place in major cities all across India. Contestants have to impress the judges with their songs and get to go to the live shows. Once the live shows start, the viewers at home are the ones who vote for their favorite contestants. Winners of the show get prize money and a contract with Sony Entertainment for Rs.1 crore.

Next on our list of Star Plus singing shows is India’s Raw Star. Gajendra Singh created the series and airs on Star Plus. Gauhar Khan hosted the show while Yo Yo Honey Singh mentored the contestants. Singers like Mohit Chauhan, Shaan, and Kailash Kher have all appeared on the final episode as guests with the three finalists and performed with them.

Another on our list of singing reality shows in India is ‘Dil Hai Hindustani’. The show was broadcast on Star Plus and had the weekend prime time television time-frame. This show is different from other singing shows because it allows people from all over the world to compete, not only Indian citizens. The winner of the first series was Haitham Mohammed Rafi from Oman. The Stage is the next on our singing shows list that is broadcasted on Colors Infinity. The series is India’s first English singing talent show. All three seasons have had the same judges of Monica Dogra, Devraj Sanyal, Ehsaam Noorani, And Vishal Dadlani, and has been presented by Shibani Dandekar. The show airs on weekends and has been considered a fan favorite especially of the English-speaking community in India.

The Voice India Kids is another reality tv in the singing shows in India list. The series airs on &TV and Star Plus. The show is based on The Voice India series and is for children between the ages of 6-14 years. The show takes place in three rounds – the Blind auditions, the Battle rounds, and the Live performance round.

In the first stage, four coaches select 15 singers through a blind audition process. In the Battle rounds the coaches mentor and help their contestants develop their voices. The coaches then choose two members of their teams to battle each other by singing the same song. They then need to choose one member who will advance to the next stage.

Finally, in the Live Shows, the remaining 7 members from each team give solo performances to impress the audience and judges. In the Finals, the final four contestants compete for the title of the winner based on live public voting.

One of the best singing competition shows in India is Superstar Singer. This is broadcast on Sony Entertainment Television and is aimed at children between the ages of 2 to 15 years. Four mentors or judges help train the children to improve their performances while sharing their views or comments about the performances. The children compete to win the most votes and slowly move forward to the finale. The Super Finale has 6 top finalists from which the contestant who gets the most votes wins. The winner gets a cash prize and the title of Superstar Singer. One of the most popular singing competitions on TV ‘Sa Re Ga Ma Pa Lil Champs’ has a huge fan following in India. The children on the show are judged on the quality of their voice, the versatility in their performances, and their singing talent. The first season aired back in 2006 with Bappi Lahiri, Abhijeet Bhattacharya, and Alka Yagnik as the judges and Shaan as the host.

Next on our Indian singing shows list is Bharat Ki Shaan: Singing Star. This show was broadcasted on DD National and produced by Gajendra Singh. Till now there have been 3 seasons with Bappi Lahiri, and Kavitha Krishnamurthy as judges in Season 1. Season 2 had Ismail Darbar and Usha Uthup as judges. Season 3 saw Usha Uthup, Anand Raj Anand, and Lalit Pandit as the judges. The winner of Season 1 was Sumit Khatri, Season 2 winner was Mamta Raut, and Season 3 was Vishal Mishra.

Indian television singing shows have a special place in the hearts of the viewers. These singing competitions are a great way for people to show others their talents. They help people gain recognition and jumpstart their careers.

So, let us know if you agree with our list of the most popular reality singing competitions in India.