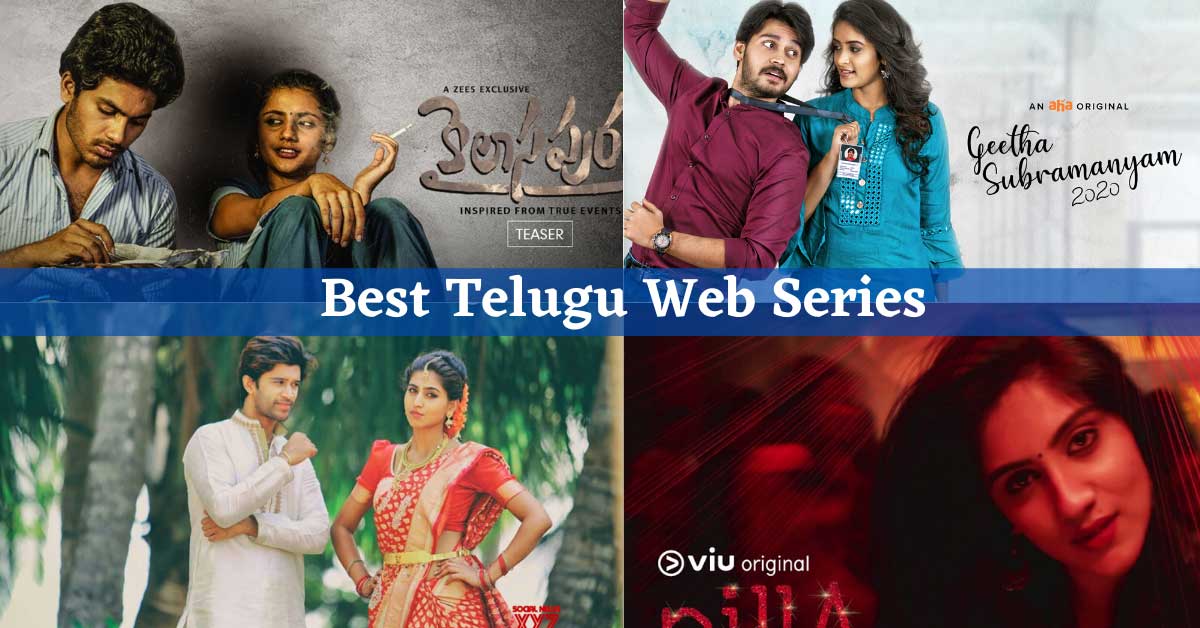 Tired of watching the same old programs on TV? Looking for something new to binge-watch while stuck at home?

Then why not try watching a Telugu web series?

If you want to watch something new and want to see some fresh faces, then let’s check out the 10 Best Telugu series you can’t afford to miss If you like thriller movies or shows then this is for you. Based on the lives of five college students who all belong to the small town Kaliasapuram. The web series takes a twist when the group gets addicted to marijuana and starts getting involved in the ganja trade. But, when one of the members gets killed, the other four find themselves trapped in a web of lies, danger, and deception.

This web series is available on Zee5 to binge-watch.

One of the first-ever Telugu web series, Muddapappu Avakai is a romantic comedy where two people who are poles apart, are forced into marriage by their families. What happens when a bubbly and outspoken girl is asked to marry a quiet and introverted boy? Do the couple sort out their differences or is their relationship doomed from the start?

The next popular Telugu web series on our list is a very relatable rom-com – Geetha Subramanyam. Geetha and Subramanyam are in a live-in relationship. But their constant bickering keeps getting them into scrapes. With everyday life and problems creeping into their relationship will they realize that they are meant for each other? Or will they crash and burn?

This Viu Telugu web series is a must-watch for all. The story revolves around subjects like pre-marital sex, pregnancy scares, and stalking. The protagonist of the story goes through a whirlwind in trying to find the person stalking her and threatening her. While there are some comic moments in the series, the overall theme is something that most girls need to realize might happen to them. If you are in the mood for a thriller, then you need to watch 703. One of the best Telugu web series, it is about a writer who is investigating the murder of a girl. He starts looking into her death but it is very similar to one of his works. But, because of his poking and prodding, he keeps getting into trouble. So, does he finally solve her death?

Another web series that is very relevant to our generation. This mini-series deals with marriage and the doubts that come along with it. The main protagonist goes through these doubts in the series – Who should she marry? When should she marry? Where should they host it? But like they say, ‘marriages are made in heaven’, the series proves that it is good to have these doubts but to not let it hold you back. Another good viu Telugu web series is Pelli Gola. Based on a couple who are being forced to marry one another, but do not want to get married. They hatch a plan to run away from the wedding. But when that’s not possible, they try to ruin the wedding plans. Unfortunately, while trying to ruin the wedding, the couple falls in love.

This web series is full of humorous moments and funny incidents that either the groom or the bride create. To see the funny moments of the couple log into the Viu App today.

Next on the Telugu web series list is the new series Endukila. This comic series features the story of an extremely unlucky man. Bad things happen to him no matter where he goes and what he does. The plot of the series thickens when he falls in love and a series of errors occurs while he tries to win the heart of his lady love. Watch the plight of Sumanth Ashwin as he struggles to change his bad luck and win over his love.

Another great addition to the Telugu web series list is Vaddante Vasthave Prema. This web series is based on love and past experiences. Two men who have had bad experiences when it comes to love, find themselves falling again. So, what do they do? Do they learn from their past experiences or do they move forward at a chance of love?

Watch the series to find out what happens.

When planning to watch a web series, you don’t need to understand the language. With translations easily available, you can easily catch web series from different countries and regions.

The above mentioned Telugu web series have a certain uniqueness to them even if the plotline seems similar. Each director and actor has added their special flair to the series, making each one different. So, let us know which one of the web series lists entertained you and if you have any suggestions to add to the list. Top 8 Telugu Serial Actress Who Are Ruling The Entertainment Industry